This city is giving super-fast internet to poor students

Homework is hard. Homework when you don't have an internet connection can be impossible.

Around 5 million homes with school-age children don't have high speed internet, according to the Pew Research Center. In Chattanooga, Tennessee, 22.5% of residents live in poverty, according to the U.S. Census Bureau, and nearly 25,000 kids are on the public school system's free and reduced lunch program.

Chattanooga is trying to close its "homework gap" with a pair of programs that help low-income families get online.

"We can't have digital gated communities. The power of the web should be an equalizer, not something that creates greater inequity," said Chattanooga Mayor Andy Berke.

Last August, the city launched a program to offer discounted high-speed internet, called NetBridge, to households that have a student receiving free or discounted lunches (a common way to measure poverty). It also created a class called Tech Goes Home that teaches families basic internet skills, such as how to create an email address, pay bills online, or set privacy rules for kids. It also offers families a $50 Chromebook to use at home.

So far, 1,700 families have signed up for NetBridge and more than 700 have graduated from Tech Goes Home. That's a small sliver of the homes that need it.

Chattanooga is able to offer the discounted connections directly to lower-income residents thanks to a unique high-speed set up in the city.

Most broadband internet in the U.S. is provided by private providers, but high-speed networks are costly to build and maintain. Instead of waiting for the internet to come to town, Chattanooga took a different approach. It built its own world-class fiber optic network.

Now it has a super fast service run by the Electric Power Board, a city-owned agency.

The network was launched in 2009, but until recently may have been out of many families' budgets. Internet access starts at $58 for 100 MBPS and goes up to $299 for a 10 GBPS connection.

NetBridge, on the other hand, is $26.99 a month for the slowest option. That cost is high compared to similar discounted plans, but it's as low as the city can legally go. (A state law prohibits it from offering internet below cost.)

Major broadband providers have also attempted to bring internet to low-income families, but the programs vary wildly in speed and availability. AT&T (T, Tech30) recently announced a $5 plan for any U.S. family receiving food stamps, but those connections are incredibly slow. Google Fiber offers free access to some families in public housing, but is only available in a very limited number of cities.

Chattanooga is planning a big push for the program when the school year begins in August.

Berke, who sometimes visits Tech Goes Home classes, is excited about the impact the program is already having. He met one grandmother who used to take her grandchildren to fast food restaurants at night so they could do homework using the free WiFi. Now they log on at home.

"This has been a huge advantage for many of these families," said Berke. "Even for kids who may have a device, they run out of data quickly. Having internet at home gives them the chance to go on the web, explore, be creative and work on things that are critical to their future." 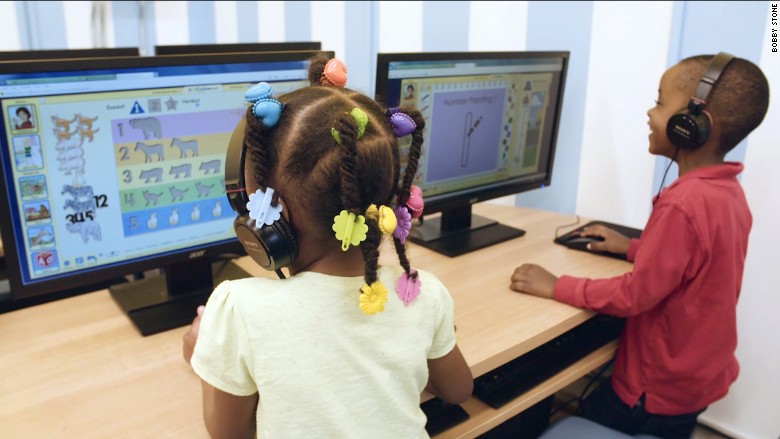