Chattanooga, TN (April 8, 2015) – EPB is rolling out a pilot program to test hybrid vehicle technology with the goal of reducing pollution and operational costs related to some of its heaviest trucks.

The three plug-in hybrid electric bucket trucks use a diesel chassis, but unlike conventional trucks, the new vehicles use an electric power “takeoff unit” to operate the 55-foot boom. When a crew arrives on a job with these state-of-the-art trucks the diesel engine can be turned off, instead of idling for lengthy periods of time to power hydraulic equipment, while the boom operates with stored electricity.

The purchase of these heavy vehicles was made possible through a grant by the U.S. Department of Energy. EPB received similar assistance for the recent purchase of three plug-in hybrid vans, which are being used by EPB Fiber Optics installers.

“This pilot program is designed to benefit our customers and community by holding down system maintenance costs and reducing vehicle emissions from day-to-day operations,” said Kade Abed, EPB vice president of field operations.

In addition to this pilot vehicle program, EPB has installed several charging stations in the parking garage next to the company’s downtown headquarters building. These charging stations compliment other similar downtown facilities designed to benefit the growing number of people using plug-in hybrid and electric vehicles.

For more information, and to schedule a demonstration of the plug-in hybrid electric bucket trucks, please contact John Pless or call 423-648-1584. 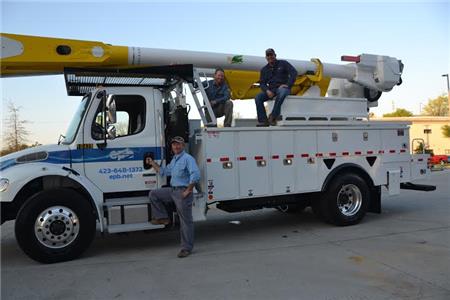