Chattanooga, TN (May 23, 2017) – Last summer’s extreme drought, along with  drastic weather fluctuations in recent years, are raising concerns by EPB and local arborists about a significant increase in the number of large trees falling on power and communications lines.

During the latest series of strong storms that swept the Chattanooga area, EPB noted that trees that were weakened by drought caused many of the resulting power outages.

“From March 1 to May 22, there were 486 uprooted tree outages, compared to 38 uprooted tree outages during the same period last year,” according to EPB Vegetation Manager George Morgan. “Most of the uproots were large oaks with hardly any root structure in soil that is saturated by heavy rain. Healthy trees should have a root ball that’s two to four times the size of the trunk, but last summer’s drought caused feeder roots to die resulting in almost no root balls.”

“On average we see about 48 days annually of temperatures above 90 degrees, but last summer we counted 102 days above 90.” Hyde said. “That creates additional stress on trees, making them vulnerable to insects and disease.”

Since Chattanooga has a 51% canopy cover, among the highest in the country, the impact of extreme weather fluctuations will continue to be realized, according to Chattanooga Tree Commission chairperson Mariah Prescott. “Last year’s drought will have lasting effects on all species of trees for years to come, especially oaks, Leyland cypress and pines.”

Morgan advises homeowners to be aware of trees that show signs of dying or leaning near power lines and buildings. “If you notice a tree or large limb that could fall on a power line or pole, call us at 648-1EPB (1372) and we will inspect the tree and if needed, remove or trim it if it’s within the right of way. If you see a tree on private property that endangers a building, call a tree contractor as soon as possible.”

In 2010, EPB became the first provider in the United States to deliver up to 1 Gig (1,000 mbps) internet speeds utilizing a community-wide fiber optic network that provides access to every home and business in its service area. In 2015, EPB became the first, and to date, only American ISP to make up to 10 Gig (10,000 mbps) internet speeds accessible to all of its residential and commercial customers as a standard offer.

EPB has also utilized its community-wide fiber optic network to deploy the most advanced and highly automated smart grid power management system in the nation. In recognition of EPB’s groundbreaking infrastructure, the Department of Energy and Oak Ridge National Laboratory are utilizing EPB’s smart grid as a national model for researching and developing best practices. EPB is also the first major power distribution utility to earn the USGBC’s PEER certification for having a highly automated, modernized electric power grid. For more information, go to EPB.com. 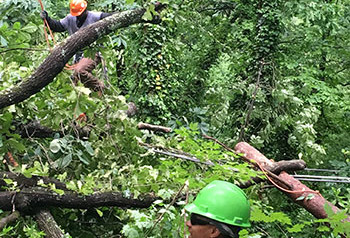