Chattanooga, TN (November 22, 2017) – In keeping with a Chattanooga tradition dating back to the World War II era, EPB opened its 2017 Holiday Windows at its downtown building with the theme of “Holidays Around the World”, representing the culture and traditions celebrated on all seven continents.

“As a gift to the community, we enjoy sharing our Holiday Windows with families and passersby during the holiday season,” said EPB Resource Planning manager Angela Love. “Creating the windows is a labor of love for our employees and community partners, who have been working long days to tell the stories about celebrating a season of joy and peace.”

Chattanooga’s new Miller Park is the theme for the North American continent window, depicting a scene reflecting the park and its amphitheater as it will appear when it opens next summer. Other window scenes include: The City of Rio in the South America window; Sidney, Australia’s iconic Opera House and bridge; the pyramids of Egypt in the window for Africa; the Great Wall of China and panda bears represent Asia; Christmas in Paris represents Europe; Santa’s vacation before the busy holiday season represents Antarctica.

This year’s theme was conceptualized with the help of the Public Education Foundation’s STEP Up students. STEM School Chattanooga students put their FabLab to work creating parts of the wintry scenes, with help from employees at Engineering Mechanical Systems who designed and created the igloo. The Chattanooga Public Library provided access to tools and equipment in their 4th floor Maker Lab, and the City of Chattanooga provided assistance with conceptualizing Chattanooga’s Miller Park window.

The EPB Holiday Windows will remain open through New Year’s Day, January 1, and can been seen on the Broad and Market Street sides of EPB’s downtown headquarters building at 10 West Martin Luther King Jr. Boulevard.

In 2010, EPB became the first provider in the United States to deliver up to 1 Gig (1,000 mbps) internet speeds utilizing a community-wide fiber optic network that provides access to every home and business in its service area. In 2015, EPB became the first, and to date, only American ISP to make up to 10 Gig (10,000 mbps) internet speeds accessible to all of its residential and commercial customers as a standard offer. 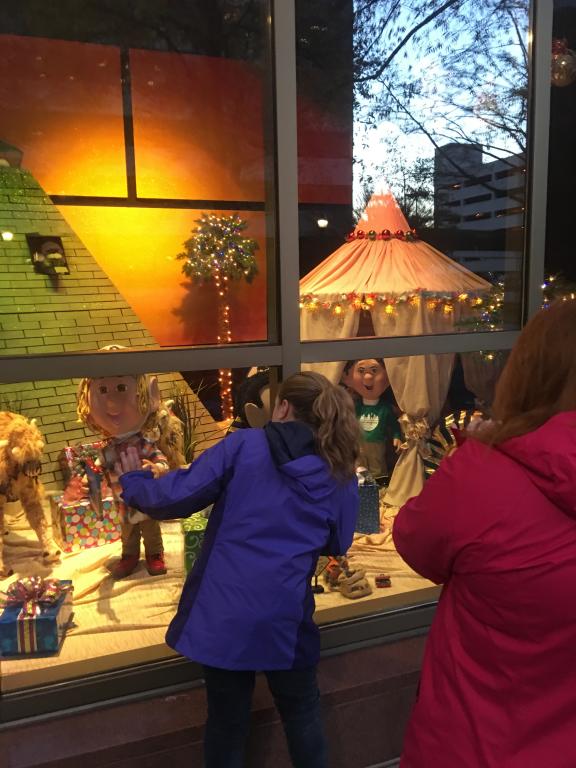