(April 9, 2018) – Joe Ferguson, Chairman of the EPB Board, has been named the 2018 Chattanooga Area Manager of the Year. He will be honored with the award during a luncheon June 6.

"I am both very surprised and sincerely honored to be recognized this way,” Ferguson said. “The Chattanooga community has meant so very much to me and my family through the years and I consider it a real privilege to contribute in any way I am able to this place we all call home.”

Member organizations of Chattanooga Area Manager of the Year (CAMOY) award this annual honor, now in its 33rd year, to recognize an executive manager who has made significant contributions to the Chattanooga area.

“Honoring Joe Ferguson as Chattanooga Area Manager of the Year 2018 is the most appropriate way to celebrate his remarkable success and numerous contributions to the greater Chattanooga community,” said Carolyn Stringer, chair of the 2018 CAMOY event. “Joe Ferguson is a visible advocate of the American Enterprise System as he developed a vision for our city where new opportunities were met with optimism and enthusiasm. His efforts have consistently focused on driving economic progress.”

Ferguson serves as Chairman of the EPB Board, a position of leadership he has held through the remarkable transformation that made the company a national model for the energy and telecommunications industries. Since moving his young family to Chattanooga in the mid-sixties to become part of the manufacturing community, Ferguson has played a significant role in helping move the local economy forward. Through his vision and insight, he has helped Chattanooga grow well beyond the smokestacks to become renowned internationally as “Gig City.”

Under Ferguson’s leadership, EPB pioneered a fiber optic network that not only led to one of the most intelligent, self-healing electric distribution systems ever created, but enabled Chattanooga to be the first city in the world to deliver Gigabit-speed internet to every home and business in the area. Ferguson understood the endless potential of the Smart Grid and fiber optics network and realized that EPB could utilize revenues from subscriber-based services, like internet, to help offset the establishment and maintenance of the community-owned Smart Grid for the benefit of all who live in the area.

In addition to reducing power outages by 50 percent (a $50 million benefit to electric customers), the Smart Grid is also a powerful economic development tool for attracting companies from across the country and creating jobs. Ferguson helped Congressman Chuck Fleischmann enlist Oak Ridge National Laboratories (ORNL) to utilize Chattanooga as a living laboratory for testing new Smart Grid technologies and best practices. Ferguson also worked closely with ORNL Director Thomas Zacharia, Ph.D., both to facilitate smart grid research and to establish a local office that assists Chattanooga area companies which can benefit from research by the national lab’s top scientists.

In his first manufacturing role, Ferguson joined the Chattanooga Glass Company, one of the leading organizations of the Coca Cola Bottling industry, in 1966. As Vice President of Manufacturing, Ferguson increased profits by 88 percent in three years and helped lead a company expansion from two manufacturing facilities to seven in order to meet the high demands of the new non-refundable bottle. After exceeding goals, Ferguson was named Executive Vice President of Sales where he increased sales significantly and helped the company move into the food and liquor container markets for the first time.

When CARTA was looking for an advanced transportation method to meet the growth of downtown tourism after the aquarium was completed, Ferguson conducted a worldwide search for a unique, emission-free vehicle. He became a pioneer in promoting CARTA’s Electric Shuttle program and 25 years later, nearly 22 million passengers have enjoyed this free service.

In 2003 then-Mayor Bob Corker tapped Ferguson to head up the newly developed Enterprise Center, which brings together programs specifically designed to strengthen the local economy.

Associates of Ferguson say he’s a master at combining a full range of talents into a team that can offer the best insight, and most successful outcomes to further a goal or initiative. His hands-on approach of managing by walking around permitted him to gather information needed to make decisions and gave his team the confidence that their opinions and ideas mattered.

Ferguson has also dedicated his time to giving back to the community. He served the Chattanooga Manufacturers Association as Chairman of the Board from 1984 to 1986. His civic involvement includes active participation in Chattanooga Rotary Club, serving on the Board for three years in the late eighties.

Nearly 20 years after receiving his Bachelor’s Degree from Memphis State University, Ferguson went back to school to complete the Executive Development Program at the University of Tennessee. And today, he helps mentor young executives with his knowledge, skill and experience.

Ferguson is a long-serving elder at Signal Mountain Presbyterian Church. He and his wife Virginia have two adult children, Scott and Lisa, as well as four grandchildren.

The 2018 CAMOY Luncheon celebrates Ferguson’s achievements June 6 at 11:30 a.m. at the Chattanoogan Hotel.

Individual tickets are $60; tables for eight are $500. Register here.

To learn more about the Chattanooga Area Manager of the Year Award, visit camoy.org. 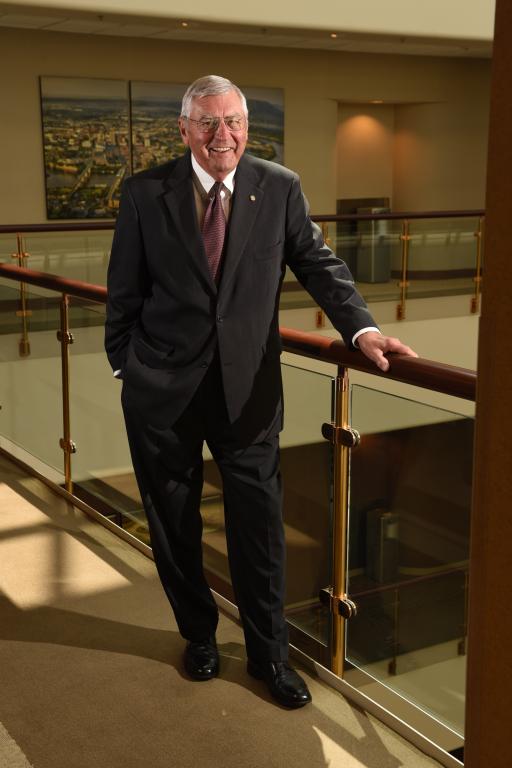