Joe Ferguson to Retire as EPB Board Chair

Chattanooga, TN (April 26, 2019) – Joe Ferguson has announced his plan to retire as EPB Board Chair on July 31. During his tenure with EPB, Ferguson led the Board in a number of transformative decisions, most notably the approval in 2008 of EPB’s plan to build a community-wide fiber optics network and other advanced infrastructure. As a result of that decision, Chattanooga has been called “The Gig City” and held up as a national model for deploying the world’s fastest internet and America’s most advanced Smart Grid electric distribution system.

“As EPB Board Chair, I’ve had the honor of working with an incredible team of people, who have a passion for serving this community with all of their considerable technical expertise and care for customers,” Ferguson said. “As I retire from the Board, I want to emphasize and celebrate the incredible things everyone at EPB has accomplished for our community.”

David Wade, president and CEO of EPB, highlighted Ferguson’s role in providing leadership and continuity throughout his tenure. “Joe was due to roll off the board around the time I was named CEO in 2016, but he agreed to stay on to facilitate the transition,” Wade said. “He has done a tremendous job of leading the Board as EPB continually strives to provide world-class energy and technology solutions to support our community in realizing its full potential.”

According to Jon Kinsey, former Mayor of Chattanooga and current EPB Board Member, Ferguson also went above and beyond as Board Chair. “Joe played a critical role in helping EPB form and deepen a number of working partnerships including joint-projects with Oak Ridge National Laboratory focused on both research and job creation,” Kinsey said. “Among other efforts, Joe provides personal introductions between Oak Ridge officials and local companies resulting in research partnerships that help area businesses resolve challenges that have become barriers to their growth.”

Ferguson has also served as a strong point of connection and partnership between EPB and many community organizations including the University of Tennessee at Chattanooga, Chattanooga State, Hamilton County Schools, and the Chattanooga Area Chamber of Commerce.

In 2018, Ferguson was honored as Chattanooga Area Manager of the Year in recognition of his long and successful career in business as well as his many contributions to community efforts and organizations including EPB.

Ferguson plans to continue his decades-long volunteer efforts focused on local growth and educational attainment. “I may be retiring from the EPB Board, but I’m not retiring from the community,” Ferguson said. “I’m midstream on working with a number of organizations on a range of educational and economic development projects. I look forward to continuing those efforts.”

“I’m proud to have worked with the EPB team and cultivated partnerships that support its mission of service to the community,” Ferguson said. “As much as EPB has accomplished in recent years, I believe this is just the beginning. Chattanooga’s advanced infrastructure and research partnerships represent a strong foundation for continuing to pioneer innovative solutions that give our community a competitive edge.”

Key EPB milestones during Joe Ferguson’s tenure as Board Chair:

In 2010, EPB became the first provider in the United States to deliver up to 1 Gig (1,000 mbps) internet speeds utilizing a community-wide fiber optic network that provides access to every home and business in its service area. In 2015, EPB became the first, and to date, only American ISP to launch a 10 Gig (10,000 mbps) internet product as a standard offer accessible to all of its residential and commercial customers.

are utilizing EPB’s smart grid as a national model for researching and developing best practices for implementing and utilizing a variety of technologies. EPB is also the first major power distribution utility to earn the USGBC’s PEER certification for having a highly automated, modernized electric power grid. For more information, go to EPB.com 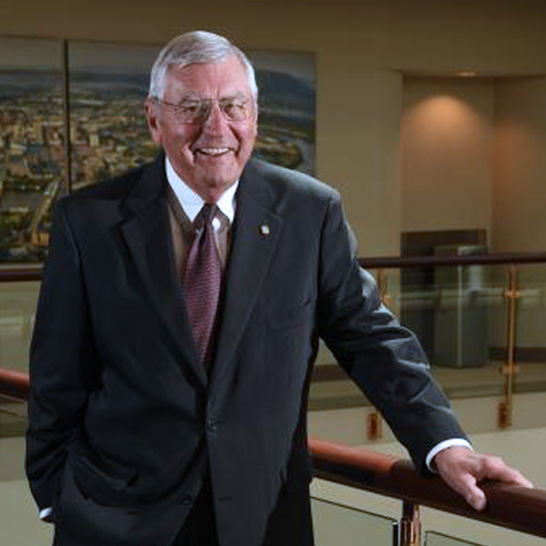