Chattanooga, TN (April 24, 2020) – In the wake of the tornados and severe storms that ripped through the Chattanooga area on April 12, EPB currently estimates more than $28 million in damage to the community’s electric and fiber optic infrastructure. This exceeds the $25 million damage total from the tornados that impacted the area in 2011.

“The devastation from this storm focused on some of the most densely populated parts of our community and consequently heavy concentrations of infrastructure were destroyed,” said David Wade, president and CEO of EPB. “Our first thought was for the families impacted by the storm, and we knew the most important thing we could do was to rebuild the system so we could restore power and connectivity to as many as possible as quickly as we possibly could.”

With the benefit of post-restoration information and analysis, David Wade was able to share a more detailed and complete outline of storm preparation, damage, and restoration efforts.

With severe storms in the forecast, EPB had called in additional crews beforehand. As tornados, heavy storms, and high winds rolled across the community after 11 p.m. on Easter Sunday, more than 106,000 EPB customers lost power. Almost instantaneously, Chattanooga’s smart grid began its automated processes which prevented about 44,000 customers from experiencing an outage that would have lasted hours or perhaps days.

This allowed EPB to immediately focus on repair efforts for about 62,000 customers who remained without power. Line crews immediately went to work. Within 24 hours, EPB had restored power to 20,000 more households while beginning the process of calling on mutual aid agreements with other utilities. Through that effort, EPB was able to accelerate the effort of rebuilding a substantial portion of Chattanooga’s electric and fiber optic system by temporarily growing its workforce by more than 1,500 utility workers from across eight states.

As EPB continued the reconstruction, the full picture of the devastation became clearer and clearer. Crews had to remove many tons of trees, debris, and damaged equipment before they could even begin to rebuild the shattered infrastructure. A preliminary survey of the damage and reconstruction includes:

To keep utility workers wholly focused on these reconstruction efforts as they worked 16-hour shifts, EPB established a major staging area and support station in the parking lot at Hamilton Place Mall. Utility workers could come to these locations to get the materials they needed along with a quick meal, so they could return to the job. EPB employees who typically work in office positions continued to be responsible for their normal work while also volunteering to put out food, distribute protective gear, and coordinate the staging of reconstruction materials.

“When you count all of the utility crews we brought in along with all of EPB’s regular employees who joined in restoration efforts, we were able to dedicate more than 2,000 people to the sole focus of restoring services to our customers,” Wade said. “At a time when so many in our community are facing severe challenges, everyone at EPB shared a sense of purpose in helping our neighbors take the first steps toward reconstruction." 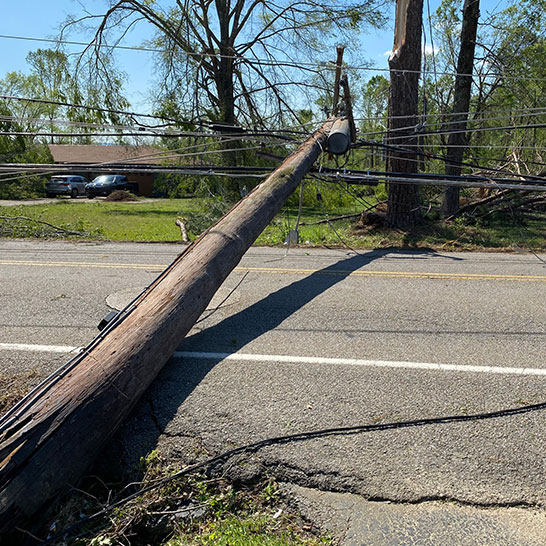